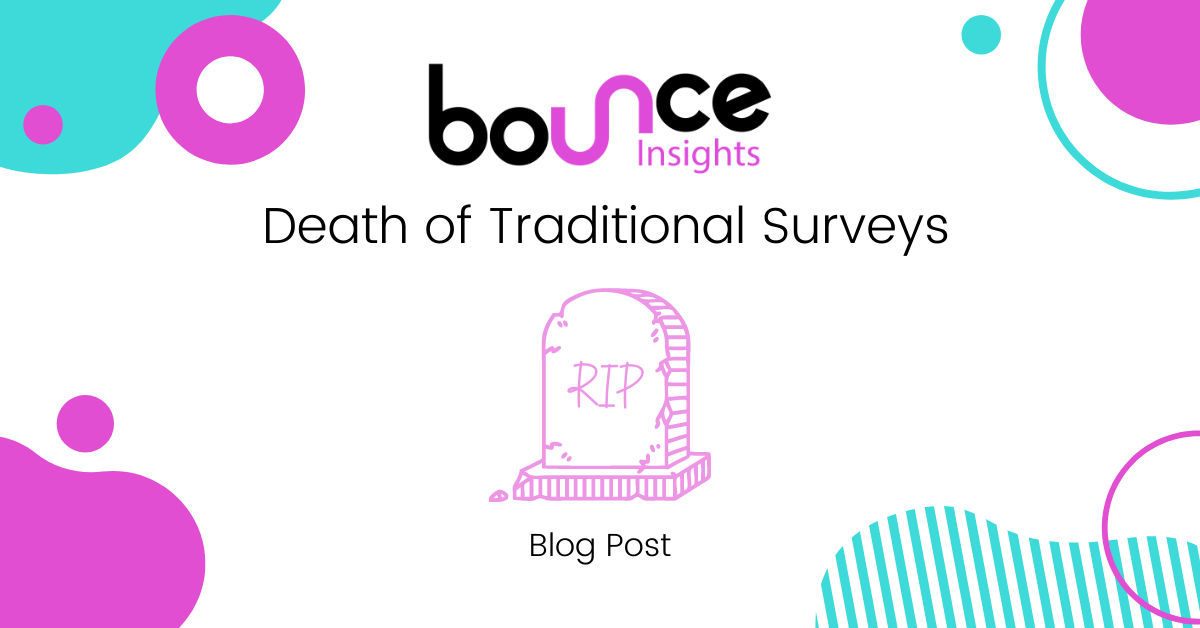 In 1997, the average response rate to surveys was around 36%. By 2003, it was 25%. By 2014, it was 9%. Now, in 2020, despite decades of vast technological advancements, the completion rate for a given survey has fallen below 2% on average. This has led to the death of traditional surveys, which are built on fundamental failures of researchers to adapt to changing consumers and technology.

Ultimately, this remarkable demise of engagement boils down to three key aspects of traditional surveys – length, design and purpose.

Research has shown that abandonment during a survey increases with two to four percentage points for every additional minute of survey length. In addition, 52% of customers don’t want to spend more than three minutes filling out a survey. The simple fact of the matter is, no real consumers are willing to spend 20 minutes doing a survey, and anyone who is, usually does not represent your customers or the population as a whole.

In every other industry, companies have been forced to embrace technology, improve personalisation, tailor their product to specific consumer cohorts, and demand a culture of continuous innovation to remain relevant. Unfortunately, traditional researchers have not kept up, and this is supported by 39% of researchers who expect the quality of feedback to worsen over the next three years.

As mentioned in previous blogs, the inability of traditional researchers and surveys to prioritise the end-user experience has a direct correlation to declining response rates. Alongside poor survey design and old-fashioned methodologies that have not adapted to changing respondent behaviours, there is one simple area of survey design that is failing researchers – repetitive profiling questions at the beginning of each survey.

Unfortunately, a fragmented supply chain means researchers must use an array of softwares for panel management, survey scripting and panel recruitment. Traditional surveys are plagued by repetitive profiling questions and technologies to stop fraudulent bots, repeat respondents and other quality issues. This has led to the monotonous, engagement-stifling process of screening and profiling questions which usually take up the first half of any online survey. The result? frustration, boredom and the omission of real consumers from ever engaging in online surveys. In addition, the incentive to to give fraudulent responses in order to fit the screening questions you believe will allow you to continue in the survey, and thus, get your reward!

The future of online surveys lies with pre-targeting of users, personalised engagement and an ability to protect quality while maintaining the overall experience of each respondent.

The final piece to this puzzle revolves around a deeper issue within traditional surveys. The purpose of each survey lacks authenticity, and respondents are disengaged from the beginning thanks to a few critical errors in research delivery. As response rates decline, online surveys have resorted to sending out even more surveys and emails to achieve their critical mass. This creates a vicious cycle where as potential respondents get annoyed with surveys, they are spammed even more surveys as a result.

In today’s world, consumers are no longer content to be treated like faceless data points. There is a necessity to have deep, personalised connections with consumers, and traditional surveys are innately opposite to this demand. Random topics not tailored to each respondent’s interests, a disconnection from previous responses given, and the growing belief that responses enter a black hole of results dilutes the value of each consumer’s attempt to give feedback.

In reality, traditional surveys feel like an interrogation rather than a genuine request for feedback, blanket bombed to the masses in a feeble attempt to hit their minimum number of responses to deliver sufficient results.

Research is a fundamental aspect of any business, empowering both consumers and companies to create their future together. Yet, research is in need of revolutionising itself, leveraging new technology and a deeper appreciation of consumers to reimagine itself in years to come. This begins with accepting the death of traditional surveys, and opening the door to new opportunities within research.

How To Design A Survey

How is FMCG market resea

The Future of Market Res

What is Behavioural Data

Getting Started With Sur